Bitcoin isn't the only cryptocurrency out there – there are many and the list is only growing! Though some have a very limited pool of users, we've highlighted the ten most popular ones here. 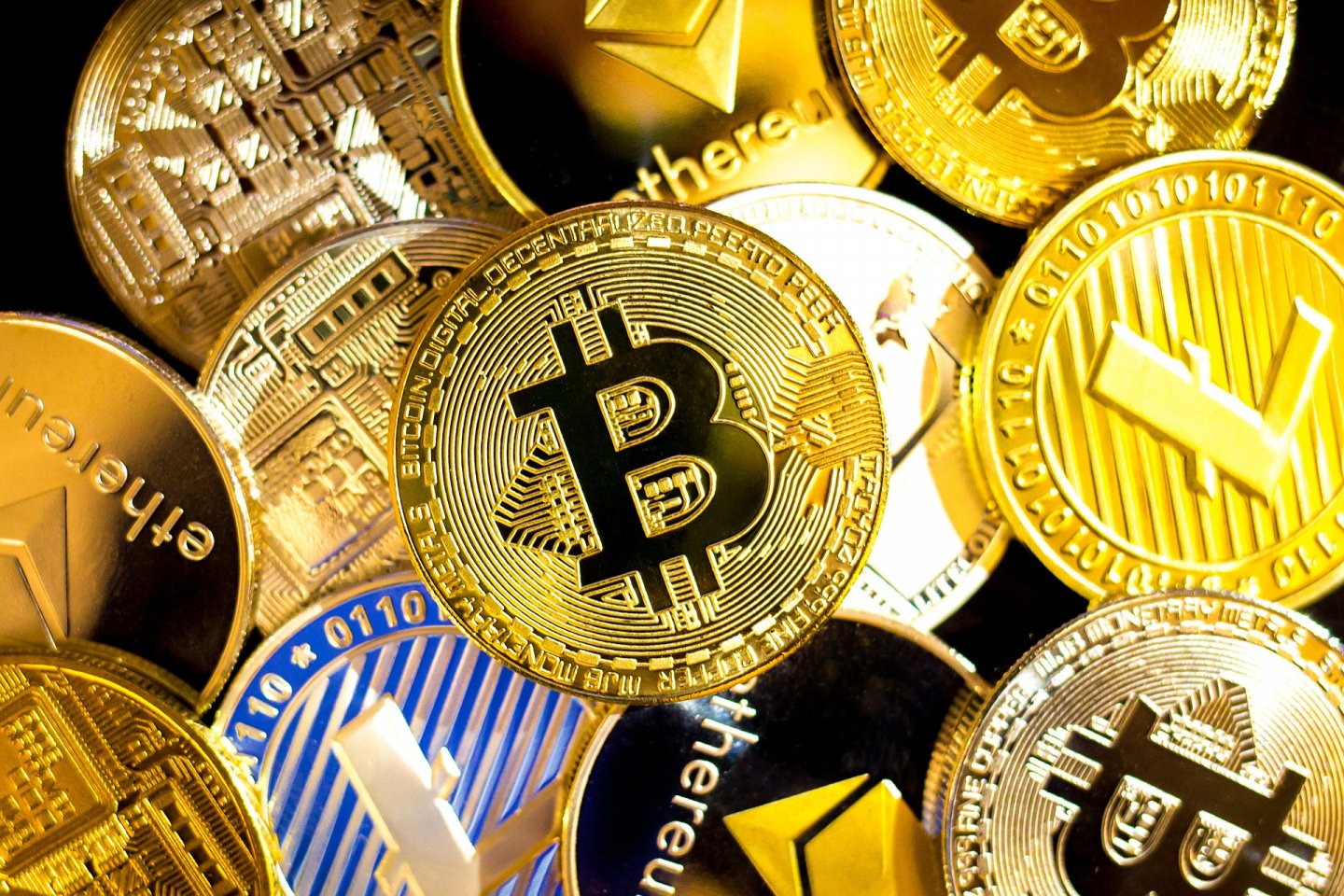 Cryptocurrencies vary in their volatility – Bitcoin is notoriously volatile, while Tether’s value is “tethered” to the U.S. dollar and so, fluctuates very little. While their name-recognition popularity generally grows over time, their desirability fluctuates – just because everyone has heard of a cryptocurrency, doesn’t mean it is the most widely used. The Top 10 ranking here is a snapshot view of a constantly changing crypto market.

For ranking purposes, we have chosen to use the metric of Market Cap, which measures the current aggregate value of a cryptocurrency in the market. Market Cap is calculated as the number of coins circulating multiplied by the value of the coin.

Now for the rankings!

Bitcoin introduced the concept of cryptocurrency in 2009, when it was created by an entity (no one knows whether they are a person or an organization) called Satoshi Nakamoto. Prized for its anonymity and security, Bitcoin was initially used mostly for blackmarket transactions. However, as mainstream retailers began to accept Bitcoin payments (Overstock.com being one of the first) the coin’s value began to quickly grow, enticing speculative buyers and excited technology enthusiasts.

Today, Bitcoin is often the first foray that newcomers make into cryptocurrency. Over the past ten years it has proven to be reliable and is the most ‘mainstream’ option. Just this month, the government of El Salvador even made Bitcoin an accepted legal tender.

Ethereum is a blockchain network of decentralized services. The cryptocurrency that is used to make transactions within the network is Ether. Some people will use “Ethereum” to refer to the coins but technically they are called Ether.

Ether was launched in 2015 and, over the preceding years has raced to become the second most popular in terms of market cap. The very first purchases of Ether were paid for using Bitcoin.

Today, Ether is used for making transactions on the Ethereum network and is also purchased speculatively by people who see the potential for profit.

Like Ethereum, Cardano is a blockchain platform. This platform was designed specifically to be environmentally sustainable. The distributed and encrypted characteristics of blockchain cause it to use a great deal of energy in most cases, which has garnered criticism. Cardano conducted extensive development research to ensure their blockchain operated as sustainably as possible. The first version launched in 2017.

Ada is to Cardano as Ether is to Ethereum. It is the cryptocurrency that is used for transactions made on Cardano. The coin is named after Ada Lovelace, widely known as the first computer programmer in history.

The value of a Tether coin is set at one U.S. dollar. The founders initially announced that they intended to back the majority of Tether coins in reserves of U.S. dollars but there has been some uncertainty as to whether this remains true to this day.

While Tether is not the most exciting cryptocurrency for speculation due to its lack of boom and bust cycles, it can be useful for making secure digital payments.

Binance, founded in 2017, is the world’s largest cryptocurrency exchange. From the online platform, users can buy and sell Bitcoin, Ether, Ada, Tether, and many other cryptocurrencies. In 2017, Binance launched its own coin called Binance Coin, which can be bought and sold for profit or used to pay service fees for Binance services.

XRP is a cryptocurrency launched by the blockchain company Ripple Labs, which specializes in money transfers. Launched in 2012 as Opencoin (and rebranded as Ripple in 2015), Ripple sought to be the “cryptocurrency for banks.”

An oft-cited flaw in Bitcoin is the time it takes for transactions to be validated – about ten minutes. XRP devised a variant on the technology that allowed transactions to take place almost instantly, which made the company more competitive with other options like credit cards.

As of 2022, XRP was unfortunately pulled off of popular cryptocurrency exchanges due to a lawsuit filed against Ripple Labs by the Securities Exchange Commission. However, as you can see XRP is still the #6 biggest cryptocurrency on the market so interested parties are still finding ways to buy the coins. Many think there will be a comeback surge and are hoping to make a profit.

Solana is another blockchain that invites developers to build apps for all kinds of secure services on their network. Solana coins are used for transactions within the platform. This cryptocurrency is still new to the game but aims to be a faster, more user-friendly competitor to Ethereum.

Polkadot is a newer technology that aims to support interoperability between all other blockchains. After we’ve discussed a good handful already, one can imagine why this might be necessary! Polkadot’s own cryptocurrency is called Dot and can be traded on most major exchanges as of this year.

USD Coin is a stablecoin, like Tether, and is also set at the value of one dollar per coin. This cryptocurrency has become a favorite of institutions as it is closely governed by a non-Profit called, Centre that releases public attestations every month. Unlike Tether, USD Coins must be backed 100% by fiat reserves.

Launched in 2018, it is still catching up to Tether in market share but it is gaining popularity for its trustworthiness. Visa now allows payments to be made using USD Coin.

Like Tether, the value of USD Coin fluctuates very minimally.

Dogecoin was created as a parody of Bitcoin in 2013 by two software engineers – Billy Markus and Jackson Palmer. The logo of the coin is the internet meme, ‘Doge,’ a Shiba Inu dog. The two intended to make fun of the wild speculation going on in cryptocurrency exchanges, however, purchases of Dogecoin quickly went from a joking matter to a profit-making venture.

The value of Dogecoin frequently rises and falls in response to internet events like tweets from Elon Musk and Tik Tok campaigns to get the coin’s value to hit some set goal.

It is sometimes used by members of Reddit and Twitter communities for small dollar transactions amongst themselves.

Learn More About Investing in Crypto

Cryptocurrency rankings are constantly shifting and the values of each coin (with the exception of stablecoins) cycle through highs and lows as the coins are purchased, sold, and mined. For the most recent stats on these top cryptocurrencies, make sure to check the exchanges – Coinbase if the most popular.

Ready to start buying cryptocurrencies? We’ve compiled a list of helpful resources below that can help you make smart financial decisions about your crypto wallet.

CNNBusiness has a trove of frequently updated articles on cryptocurrency investment. This Guide to Bitcoin for Beginners is a great place to start.

Forbes hosts a financial advice hub with everything you need to know about investment and financial decision making – from cryptocurrency investment tips to insurance choices to retirement planning.

My Crypto Advisor is a cryptocurrency consulting firm that aims to work with individual crypto investors and small mom-and-pop businesses to make crypto investment accessible to small investors. They run a blog for investment news, though it is not frequently updated, and also offer consulting services.

Anyone can post financial advice videos to YouTube, so use this resource with a critical eye. However, there are some skilled crypto experts who have cultivated a devoted group of followers who flock to their YouTube channels for investing advice. Some of the top crypto YouTubers are Coin Bureau, managed by a team of analysts; Benjamin Cowen, a great resource if you want to learn more about the nitty gritty metrics and calculus involved in crypto investment; and The Chart Guys, a team of tech educators that produces videos analyzing market changes in cryptocurrencies and other financial assets.

Want to learn more about fintech, crypto, and blockchain? Check out our 2022 guide to fintech and our Beginner’s Guide to Blockchain!