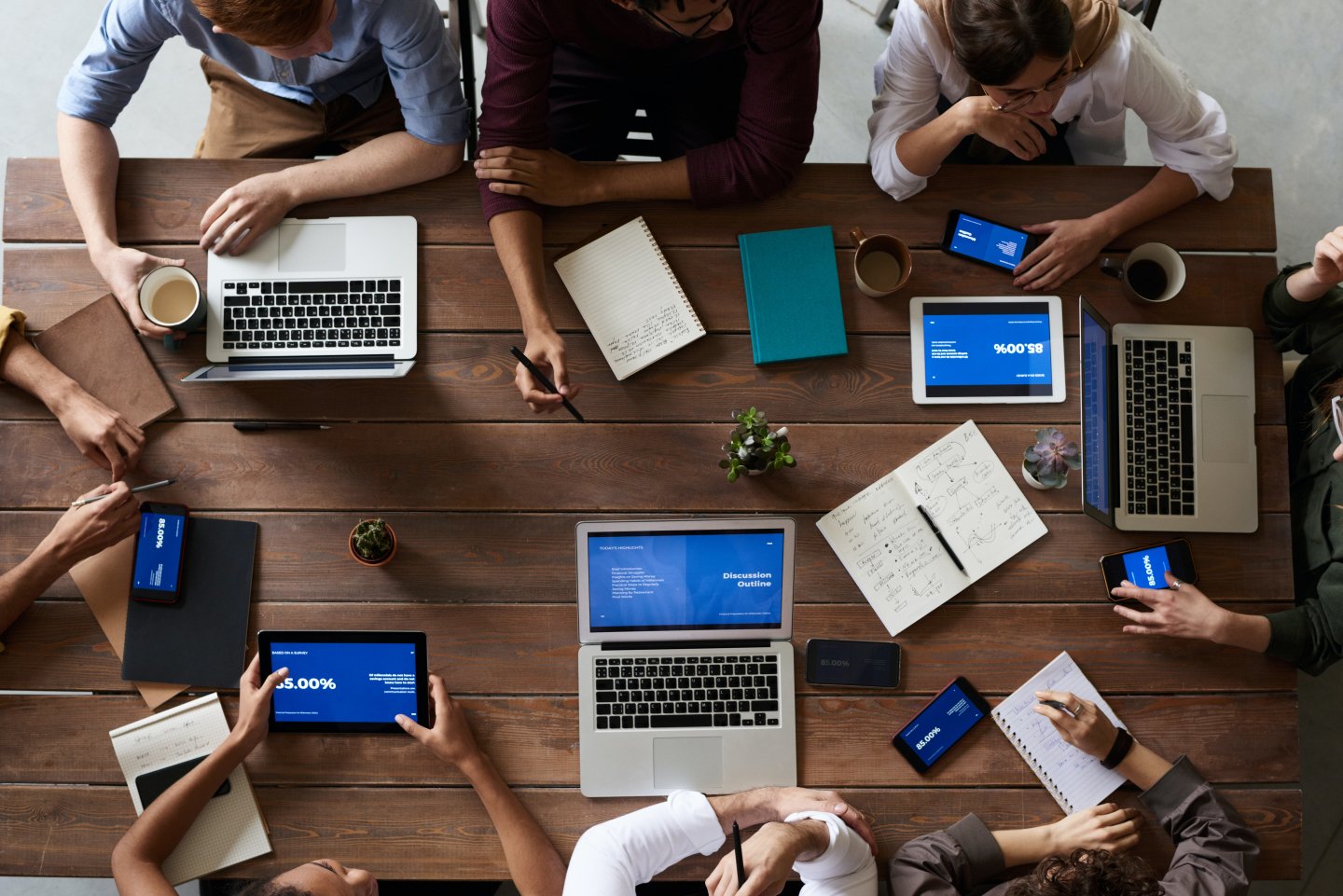 The world of coding and programming encompasses a wide range of skills and job types. While any web developer must achieve a deep understanding of programming languages, front-end and back-end developers have slightly different specialties and so should work on learning slightly different skills.. Choosing to go down either of these career paths will affect the type of work you do on a day-to-day basis, as well as the technologies and languages, your salary, and the job opportunities available to you. 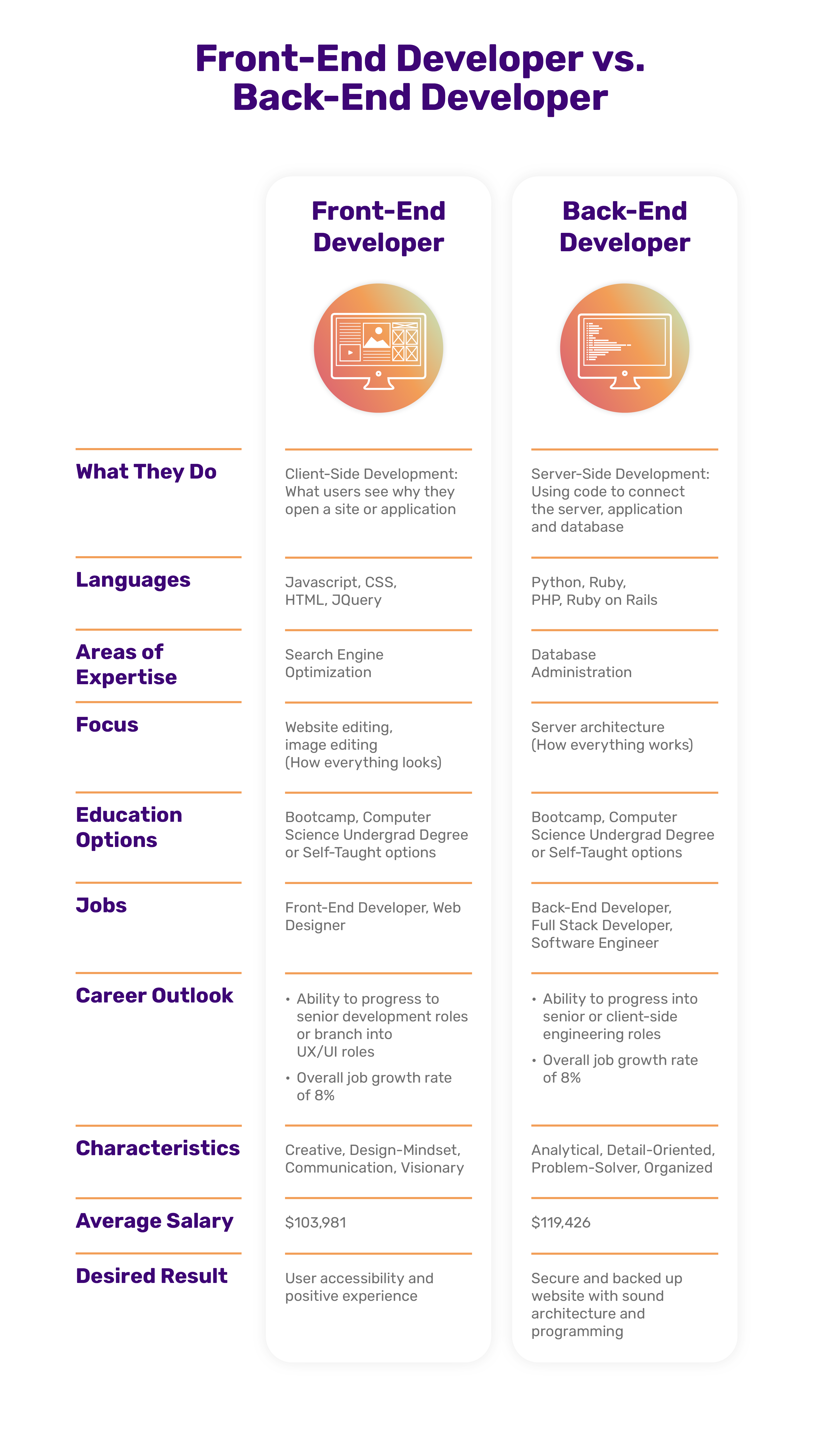 What is a front-end web developer?

A front-end developer designs and develops websites and applications. They are responsible for all the elements of a site that will be seen by the end user. Their field of expertise consists of all visual aspects of the site, and making sure they are not only functional, but user-friendly and aesthetically pleasing. Working closely with UX and UI designers, front-end developers use coding to implement features such as navigation elements, buttons, images and graphics.

An important element of a front-end developer’s role is ensuring that their sites are optimized to work seamlessly across different browsers, operating systems and devices. They must keep up with the changes and advances in their field as techniques change and the technology used to view and interact with websites continues to transform. For example, more sites are now utilizing interactive elements, as opposed to the static landing pages that were popular in the 80s and 90s. Because of this trend, today’s developers have had to become knowledgeable in creating and troubleshooting interactive elements using JavaScript.

What is a back-end web developer?

While front-end developers interact with the user or “client-side” of a website, back-end developers are responsible for the “server-side,” which encompasses everything that the user can’t see. They develop and implement all the logic and integrations that allow the site to function. To do this they’ll use frameworks, programming languages like JavaScript or Python, and maintain accessibility and cybersecurity standards.

Database management will also constitute a large part of a back-end developers’ role. These storage centers, like Oracle or MySQL, store users’ information and communicate with the front-facing elements of the site, and require regular maintenance and debugging when problems arise.

What is a full stack web developer?

Looking for the best of both worlds? A fullstack developer is the “jack of all trades” and is able to develop websites on both the front-end and back-end. Working cross-functionally, this role is highly regarded and in-demand because of its versatility. Even if their work focuses on either front-end or back-end development, full stack developers have the advantage of understanding the full process and are able to more easily communicate with the team members responsible for other elements of a project. However, the role does require a deep breadth of knowledge in all programming areas. Full stack developers may expect to spend part of their day solving issues on the server-side with APIs and databases, before transitioning to troubleshooting a design implementation issue on the client-side.

What languages are used by a front-end web developer?

While a portion of the front-end role might require graphic design and content creation, knowledge of popular programming languages will always be a prerequisite. The three most widely used languages for front-end developers are Javascript, CSS, and HTML.

As web development has increased, so have the variety of other languages used to create websites. Many have been developed based on Javascript libraries, like  jQuery, and use pre-written code to allow for more interactive UI elements. Frameworks like Bootstrap and React provide further flexibility to dynamic pages. The more advanced a front-end developer’s Javascript skills are, the easier they’ll find working with these evolving tools.

What languages are used by a back-end web developer?

Across the world of server-side development, there are four industry-standard programming languages anyone interested in the role should know.

Each of these languages are widely used, but have specific use cases where a developer might prefer one over the other. As you can see, elements of the role overlap with the client-side, so it’s a good idea for the back-end developer to have base understanding of HTML/CSS, as well as proficiency with application frameworks like Express.js and Ruby on Rails.

What languages are used by a full stack web developer?

What skills are needed for a front-end developer?

Front-end developers need to acquire skills from both sides of the brain as they use programming languages to implement visual components of a site. In some cases, the developer might take more of a lead role in the design process, while in others, they’re responsible for bringing to life a UI/UX Specialists’ vision.

Some of the top skills required for a front-end role include:

What skills are needed for a back-end developer?

A back-end developer requires a plethora of skills that include coding and database knowledge as well as soft skills like communication and organization.

What skills are needed for a full stack web developer?

Full stack developers not only need the skills of both the front-end developer and back-end developer, they also usually have advanced knowledge in databases, dev ops, and mobile apps. Given the nature of this role, an individual on the job should particularly excel in multi-tasking and be able to pivot between projects that require multiple disparate skill sets.

Salaries for front-end and back-end developers vary with education, experience and industry, but are typically on the upper end for the tech industry.

Front-end developers can expect an average salary of $103,981 according to Indeed.com, with that amount rising by more than $10K in major tech hubs like New York City and Seattle. Within the space, job titles could include CSS/HTML developer, Front-end Web Designer, UI Developer and more. Regardless, with this skill set, a salary in the six figures is not uncommon.

The average base salary for Back-end Developers is slightly higher, at $119,426. These salaries once again vary by geography, peaking in large (and expensive) cities, such as San Francisco. In addition to adjacent roles like Java Developer, Software Engineer and iOS or Android Developer, the server-side route is a great pathway to becoming a Full Stack Developer, which commands an average salary of $106,091

While these numbers are subject to change, it is clear that both are lucrative positions and in high demand. The U.S. Bureau of Labor and Statistics predicts that from 2019-2029, the job outlook for web developers will grow 8%, which is double the overall average for careers of 4%.

Front-End or Back-End: Which is Right for You?

When choosing front-end versus back-end development as your career there are a few important details to consider. If you’re the type of person who enjoys bringing a visual framework to life, but are still interested in maintaining a programming skill set, then front-end development is probably best for you. The front-end path is ultimately about maintaining an excellent user experience and interface, so if your interest intersects with working closely with user research and/or design frameworks, this is the way to go.

Interested in programming servers, creating databases, solving logical problems, and making sure that websites are secure and run smoothly? Back-end development is likely the career for you. Passion for algorithms and all types of unique challenges with coding and multiple programming languages is the key to success in this behind-the-scenes role.

If you find yourself fascinated by all elements of the development pipeline,  then full stack development is a great career path to combine the knowledge and skills of both these roles. Once again, multitasking, working in teams and strong communications are fundamental skills of this versatile job.

As you begin your professional journey, bootcamps in web development, coding, and UX/UI can help you decide which side of web design you would like to work on. No matter which type of web development you choose, you cannot go wrong as all kinds of skilled web developers will continue to be in high demand for many years to come as web technologies continue to grow and play an important part in modern life.