10 Data Types to Know About as a Data Analyst

Different data types are used for different types of programs. If you work with data or perform any kind of coding, make sure to learn the difference between these types. In this guide we'll discuss ten major data types, what they are, and how they're used. 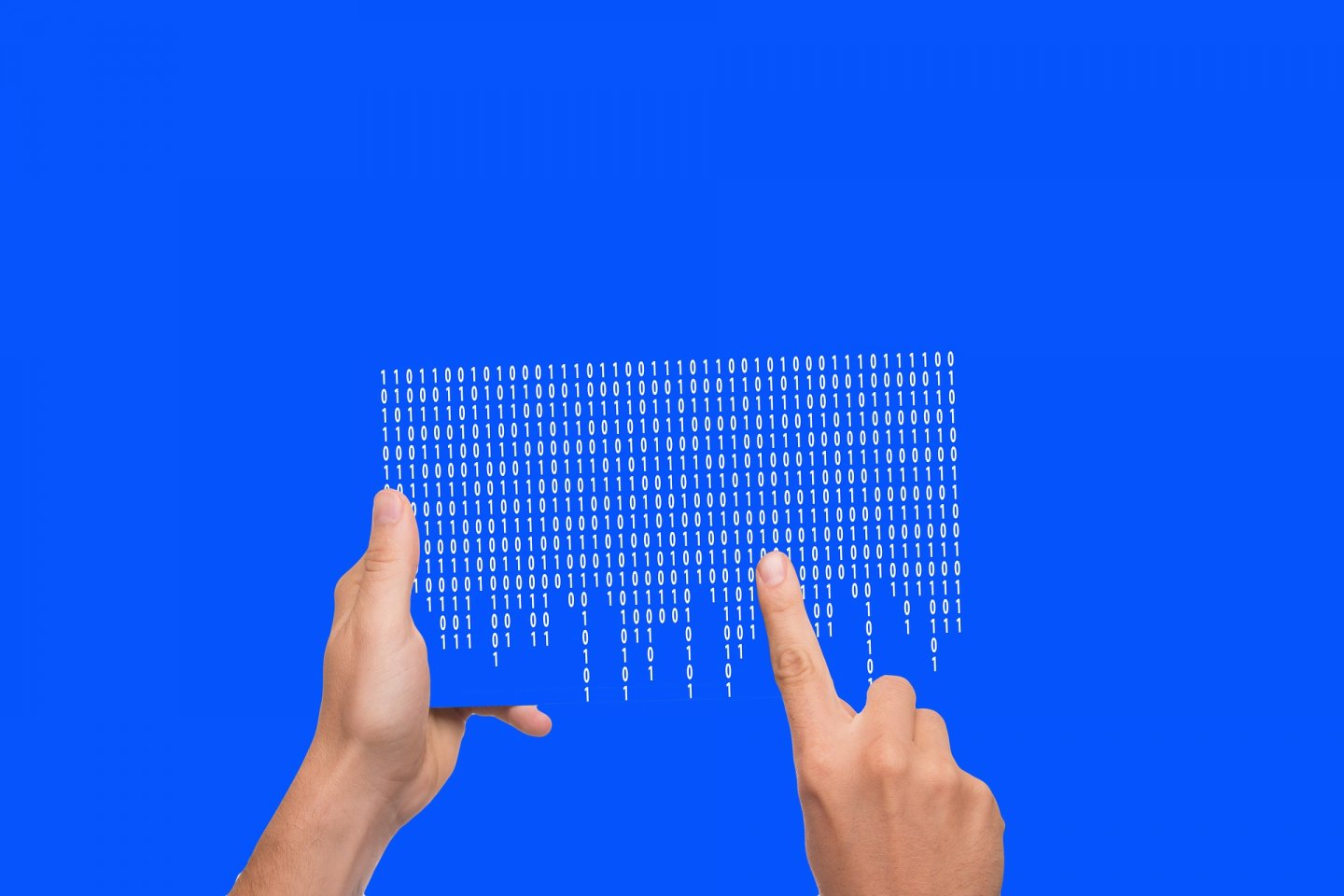 Any data analyst that uses computer programs or coding languages to do their work should know about the different data types that can be recognized by computers. These are important to know and differentiate between because only certain data types are compatible with certain types of functions. For example, you can use a SUM function to add two numbers together but not to find the sum of two text strings (say, “cat” and “dog”).

Data type classification sometimes varies between programming languages. For example, the data type Double, which is used in Java and C++, has no equivalent in Python. Below we’ll cover the major data types used in programming and analytics and discuss differences across languages.

A character, often denoted as char, is a single letter, number, symbol, or blank space. This data type is excluded from many languages (Python, JavaScript, PHP, and Ruby to name a few) and is instead categorized as a single-character string. The character data type is used in C++, Java, Swift, and Go, among others.

A string is made up of multiple characters strung together in a particular order. This data type is often used for sentences, words, and phrases. It can be used with numerical characters, though mathematical functions cannot be performed on this data type. The length of a string is defined as the number of characters in it (including blank spaces). Most programming languages use this data type, though in C Programming it is not built-in. Instead, in C, strings are formed as an array of characters.

“The quick brown fox jumps over the lazy dog.”

Like an integer, a long data type is also used for numerical data. It is available in most languages that have a limited range of integers, such as Java and C. In Java, the long data type can represent whole numbers between −9,223,372,036,854,775,808 and +9,223,372,036,854,775,807. It is used mostly for dealing with numbers outside of the range allowed by the integer data type. Long is not used in languages like Python where large numbers can be represented as integers instead.

Languages like Java, C++, and C use the long long (C, C++), biginteger (Java, Go), or bignum (Ruby) data type for integers that cannot even be represented as Long. Python does not use this data type or the long data type since the integer data type can represent any whole number.

Most languages that support long data types also support a data type called short, which is used for whole numbers within a very narrow range–between -32,768 and +32,767 for Java and C. Any number expressed as a short can just as easily be expressed as an integer, so this data type is not frequently used. However, a short can use less memory (measured in bytes) than an integer and so, is used in programs that must work with minimal memory.

A double is also a floating point number, but it can hold twice as much memory as a float and so, can be very precise. In most languages, a float number can have up to seven significant digits, while a double can have up to fifteen. In Python, there is only one floating data type, called float, but it has the same level of precision as the double data type used by other languages.

A boolean is a true/false data type. It is often used in writing conditional IF expressions. In Python, the boolean type is called bool and holds a numeric value of 1 (for true) or 0 (for false).

An array is a collection of multiple elements. This makes it a composite (rather than primitive) data type. The exact definition of an array does vary slightly between languages. In most cases, elements are ordered by index. In some languages, an array can be either single-dimensional (like a list) or multi-dimensional (like a spreadsheet with rows and columns). C++ uses another data type called a vector for arrays that do not contain a fixed number of elements.

Sometimes it is very obvious which data type should be used for particular applications in programming. For example, the true/false Boolean data type is a clear choice for indicating whether a device is turned on or off. Other times, the choice is not so obvious. For instance, when working with numbers, how do you choose whether to use an integer or a float? Consider the following:

Ready to learn more about data types? Your next step is to learn about the data types in a particular programming language that interests you. Python and R are both useful languages for those interested in data analytics. Ruby, JavaScript, and C++ are other popular options.

You can also learn even more about data analytics from our comprehensive Guide to Data Analytics. 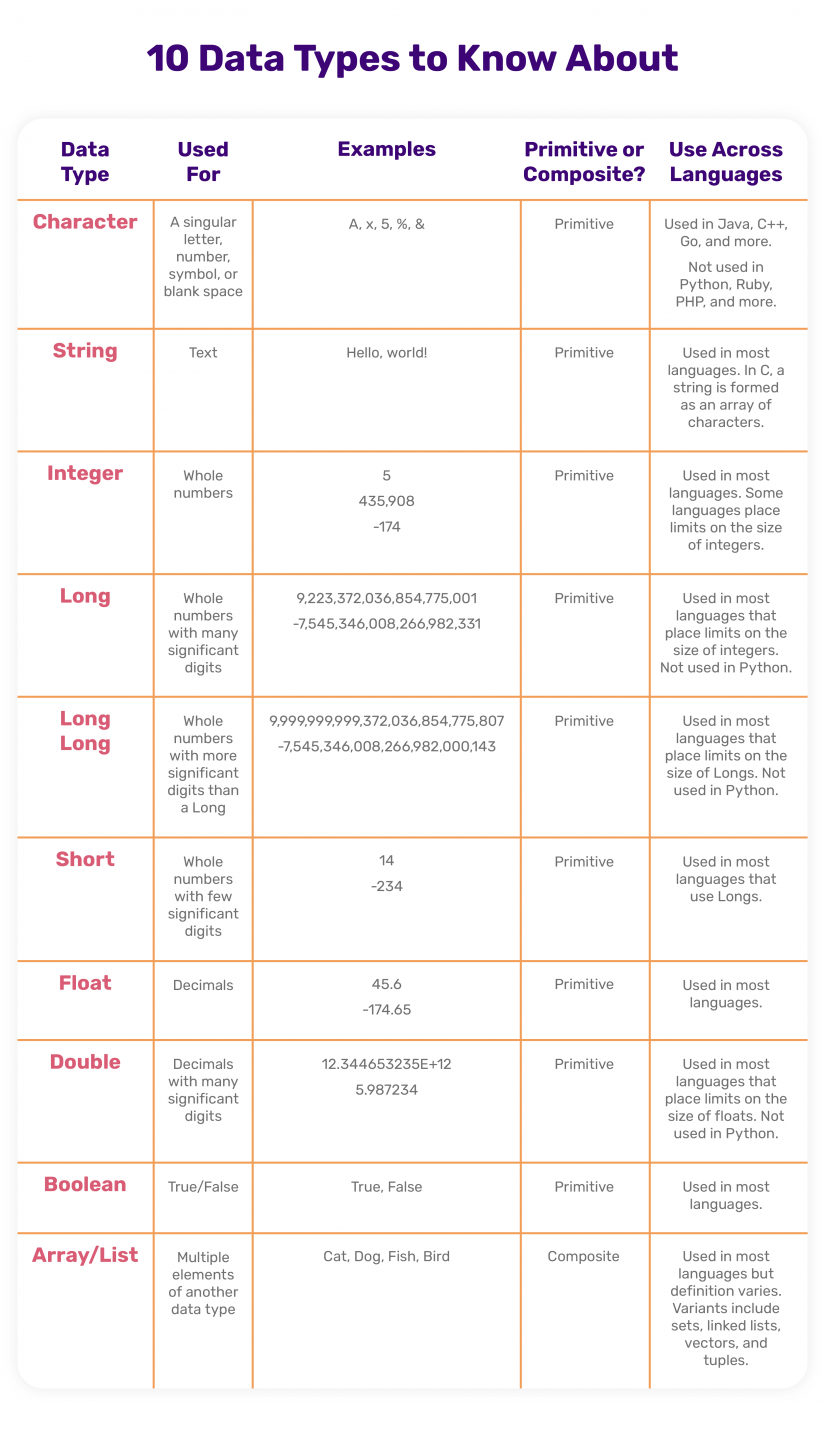